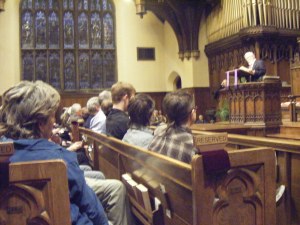 On April 18, 2011, Pulitzer Prize-winning poet and environmental activist Gary Snyder came to Minneapolis to do a reading of his work, and being a fan of his poetry I was sure the event was marked on my calendar, post-it noted on my laptop and entered into my phone the very day the news came out. When the date finally came, it just so happened that I was growing this blog and therefore thought the event would be an opportunity to get a big name. Unfortunately, having only received drawings from people generally-receptive to the idea, I naïvely walked into what would come to be a cold rejection from a personal hero.

Arriving early to the Plymouth Congregational Church early so that we could get seats near the front, my friend and I squandered away the time watching the crowd pour in. Then suddenly, I saw a familiar face come in; at the time I could not put my finger on it, but the man’s features and crop of snow-white hair reminded me of … someone. Was it Robert … Bly? I leaned forward to the people in front of me and asked, assuming (for whatever reason) that they might know; they didn’t. And lest I let the ambiguity fester, I pushed the question out of my head. Yet even as I tried to draw my attention elsewhere, I found my eyes wandering to where the man sat a few rows away.

Short of approaching the man and asking him who he was, I knew there was nothing I could do. That is until I remembered I was a youth in the 21st century, an era where speculation has effectively been eradicated: I pulled up his photo on my smart phone and compared the two. Yep, it was Robert Bly (website), a Minnesota author and poet with 50+ books under belt written over just as many years. 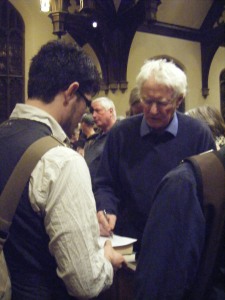 When Gary Snyder’s 90-minute reading was over, I allowed myself to be carried with the crowd until I approached the man. Nervous, “Mr. Bly?”

In a mumbling voice, he answered: “Yeah?”

“May I have your autograph?”

“Sure.” He pulled a pen from his pocket and signed a sheet of paper in a single, slow stroke not lifting his pen once. As the Y in his last name began to trail, I moved in.

“And can you draw me a giraffe?” Without missing a beat or giving it any second thought, he complied. The person who only a few hours before I could make out as “someone” drew me a wonderful picture of … something.

Shaking his hand, I thanked him not only for the favor but also for all of his work. Unfazed by the entire exchange, he slipped his pen back into his pocket, said it was no problem and moved on with his life.

The Dharma Bum Bums Me Out**

I retrospect I should have known that he would have turned me down; for instance when he said that he was not interested in having a question-and-answer session nor that he was going to speak up just because those on the second-level could not hear him. Also, I should not have overlooked the fact that some of the most well-known beats are notorious for being … impolite.

By the time I made my way to the front of the line, a knot formed in my throat, which had the effect of pitching my voice to the higher notes on the scale. Being a writer myself and someone who carries around The Portable Beat Reader (1992) edited by Ann Charters like it’s the New Testament, here I was (after all) paying my respects to a contemporary of Kerouac and Ginsberg, the “Thoreau of the Beat Generation” and a 1975 winner of the Pulitzer Prize for his collection of poetry entitled Turtle Island (1975). For all of three minutes I could speak in nothing less than a falsetto.

Handing him a few books to sign, which he did without so much as batting an eye to me. In fact, save for what felt like a forced greeting he probably would have let the moment pass in silence were I not willing to fill it. “And this book here,” I said while pulling out a copy of No Nature (1992), “it’s from the University of Minnesota library where I go to school. Would you be willing to sign this, too? 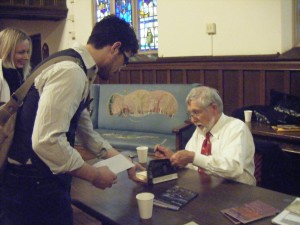 Pulitzer Prize-winning poet Gary Snyder about to break my heart.

He looked up to me, his west-coast accent a (surprisingly) soothing monotone: “In my experience, I don’t usually sign these because they tend to get stolen.”

What does one say to this? All I could do was stare, watch him slowly sign his name as guilt washed over. Yes, I felt guilty doing what I thought to be a nice deed for my library. Again, in retrospect, I should have learned from this moment, but as they say: ‘In the pursuit of giraffes, you’re bound to get a few horses, but you’ll never know until you –‘

His worn, bespectacled eyes gave away none of his thoughts.

“I run a blog dedicated to pictures of giraffes drawn by people who should not be drawing giraffes, and being a great fan of your work, I was wondering if you could do me the honor of drawing me a giraffe?”

The pen and paper was ready – the very same Robert Bly had used.

But there was only silence.

(As I tried to hold my charming grin, I could feel the corners of my lip quiver.)

Our contact didn’t break, the silence growing caustic, as my heart began to race. People were watching, I knew, perhaps offended that a plebeian would ever step on the robes of a king. In that moment, I knew only shame, thinking, You’re right, there is no reason for any of this. My life is a waste.

Without knowing it I had been holding my breath, and as I let it go I squeaked out a mousey “OK” and rose to my feet. Like a dying animal, I scurried away to hide myself so I could shake pathetically, die, without embarrassing myself further. Had this really happened? I thought, Did I just make a complete ass of myself in front of Japhy Ryder, Jack Kerouac’s spiritual guide in The Dharma Bums (1958)? Now when I write will the literary gods forever look down on me, cursing me for my offense?!

There are times where I still think back to this day, Snyder’s voice as clear in my head as though he were there … hacking away at my self-worth.

But at least I got a sweet drawing of a car.

**Or should I say, the Dharma Puns?