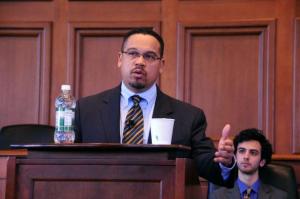 Keith Ellison (twitter) is a U.S. congressman whose district centers on Minneapolis, MN, and happens to be the first liberal politician I have ever seen in person (way back in the 2008 summer of my youth). He is the first Muslim elected to Congress, a co-chair of the House Progressive Caucus and thus a national voice on progressive issues. I try my best to keep my politics out of this blog, but I’ll admit that he’s a personal hero of mine. (I’ll also refrain from commenting on whether or not he is a better artist than Wisconsin Republican Paul Ryan).

(But let’s be serious – it’s not partisanship to say that Ellison’s giraffe is clearly better. It’s artistic elitism.)

There is not much of a story behind this piece. In February 2011 I was speaking at a University of Minnesota rally at the state capitol (at which Ellison was also making an appearance) and approached the congressman shortly after he left the stage. While everyone else was approaching him to shake his hand, take a picture, and so on, I pulled him aside behind the stage and made The Ask.

And without missing a beat, asking “why?” or offering any resistance at all, he took the notebook I put in front him and began to draw. As you can tell, this was not something he just dismissed; he took it seriously and tried to make something he could be proud of.

Well, as proud as one can really be of this.

3 thoughts on “Giraffe Art By US Congressman Keith Ellison”