Paul Provenza is a comedian, filmmaker and writer perhaps best known for his long list of acting roles and 2005 documentary The Aristocrats, which is about the infamous joke of the same name. For those who may be not familiar with it,

“The Aristocrats” is a longstanding transgressive joke amongst comedians, in which the setup and punchline are almost always the same (or similar). It is the joke’s midsection – which may be as long as the one telling it prefers and is often completely improvised – that makes or breaks a particular rendition [Wikipedia].

For those in the audience comfortable with vulgarity in its many films, it’s something that I would recommend; for the queasy, you should probably refrain. Here’s the trailer [SFW]:

So following my traumatic experience with Pulitzer Prize-winning poet Gary Snyder, I have actually become a little nervous when soliciting giraffes (and yes, I am not blind to the irony of this). Thus I have been working to develop new approaches that will (hopefully) make me feel like less of a tool . Obviously it’s a work in progress, but my experience with Provenza may have led me on to the slyest approach yet ….

One of the guests at the 2011 America Atheists Convention, Provenza did a brief reading from his book ¡Satiristas! (2010). Catching him as he was leaving the room, I pulled him aside to ask a few questions about his work (his documentary was a Holy Grail of Naughty in my neighborhood). Slowly edging himself away to make a book signing, I seized the opportunity and asked him if I could have his autograph. Happy to do so, he wrote a nice note (“Fight the Imaginary Power!”) punctuated with what I can only assume to be his name. While he still had the pen in hand, I decided to strike:

He looked up from the paper, “what?”

“A giraffe. It’s for the internet.”

He just looked at me. What else was there to say? 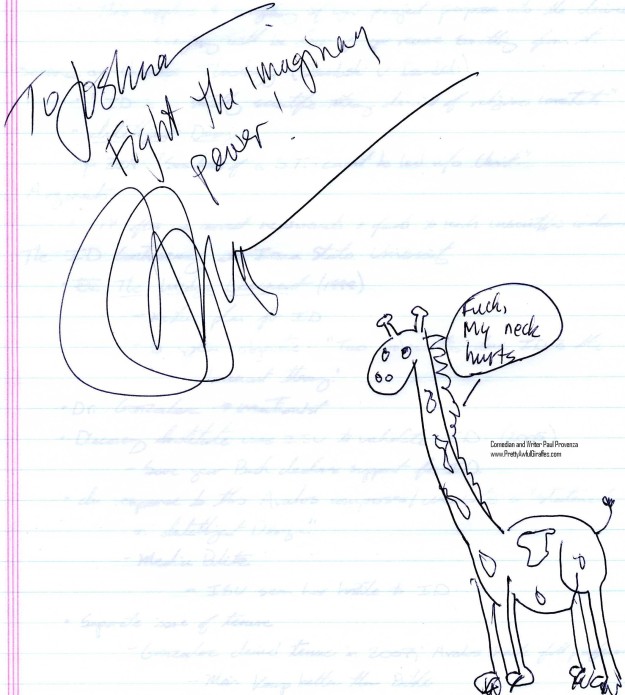 I’ve never tried to do the Aristocrats joke myself, but I’m sure it would go something like this: “A family of giraffes walk into a talent agency hoping to be a part of the best agency in the country, capable of scheduling a meeting without much delay (they’re fucking giraffes i.e. hard to miss) one agent asks to see their act … [UPON REFLECTION – DELETED] … And that’s why this giraffe’s neck hurts.”

1 thought on “Giraffe Art By Comedian and Filmmaker Paul Provenza”