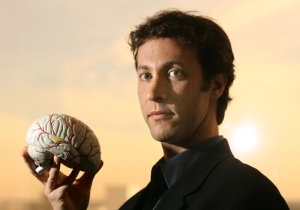 Let me begin by saying that if you ever get the chance to meet Dr. David Eagleman (1) he is one of the coolest guys ever to just sit around and shoot the breeze with and (2) it may seem like a joke when he corrects your calling him “Mr. Eagleman” to “Dr. Eagleman” but he is totally serious (trust me on this). Unfortunately, my hoodie-wearing professors at my small public liberal arts college have corrupted my understanding of hierarchy, which I am slowly learning will likely lead to my inevitable inability to secure long-term employment.

(Note: it is not uncommon for me to refer to my Ph.D.-wielding professors as “Doc”, “Supreme Commander”, “Citizen”, etc. In fact, I am certain that I could have avoided some of the awkward moments between Dr. Eagleman and I had I simply referred to him by the latter title. I mean, Citizen Eagleman sounds like it should come with a slice of apple pie as the national anthem plays in the background.)

Dr. David Eagleman (web; twitter) is a neuroscientist at Baylor College of Medicine where he directs the Laboratory for Perception and Action and Initiative on Neuroscience and Law. He author of four books (with two more forthcoming) including the bestsellers Sum: Forty Tales from the Afterlives (2009) and Incognito: The Secret Lives of the Brain (2011) and has written for an array of publications including Slate Magazine, New Scientist and Discover Magazine. In addition, when he is not studying synesthesia, time perception, and the intersections of neuroscience and law he spends his free time being a Renaissance Man by geographically mapping Asp Caterpillar populations and the symptoms of their venom, inventing philosophy, and drawing giraffa camelopardalis.

Actually, as I write this I am beginning to realize why he stresses the prefix before his name – it’s an act of humility. 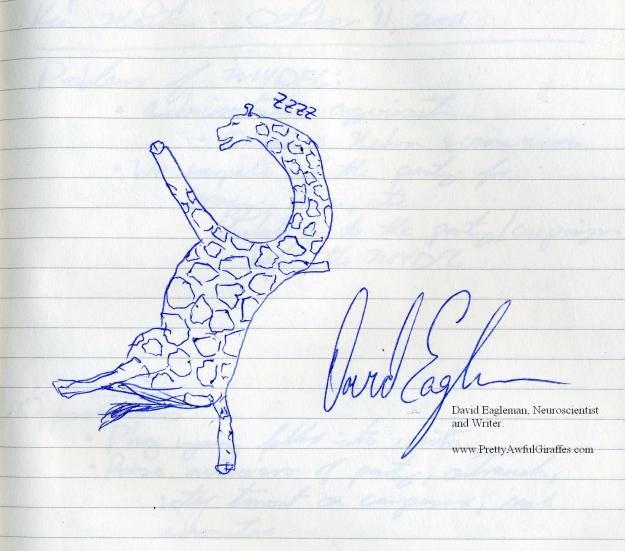 He must know that he could easily get away with being called The All-Knowing Dr. David Eagleman, Keeper of Time and Multi-Sensation.

2 thoughts on “Neuroscientist David Eagleman and His Giraffe”