The following comes from a good friend of mine, Andie Whitaker (twitter), who besides being active in the Twin Cities political scene also runs a blog called Goodbye Disposable Hello Cloth. After running into Gene Larkin at a hardware store in Blaine, MN, as he was there promoting the store and signing autographs, Andie was kind enough to wait around and get what I can only describe as the best damn submarine-giraffe I have ever seen. For those unfamiliar with Larkin, he is a former switch-hitting first baseman and right fielder for the Minnesota Twins. One of only seven Twins to play at both the 1987 and 1991 World Series, Larkin is perhaps best known for hitting a game-winning single during the latter championship game. 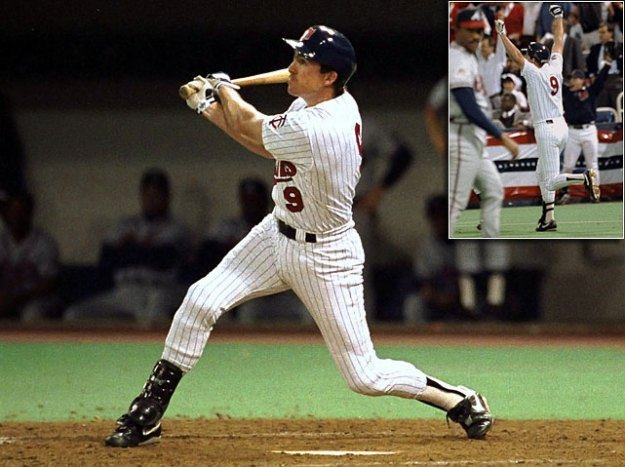 I had the opportunity of meeting Gene Larkin at a hardware store in Blaine, MN. He was there as part of a promotion for the store. Many fans began lining up to meet the Twins legend at least an hour before he arrived. All of these fans were waiting patiently with their baseballs, bats and cards in hand with a great deal of excitement. There I stood in line with a blank sheet of paper and those surrounding me in line gave me a look as if I was lost.

When it was finally my turn to talk with Larkin and get his autograph, in a shy voice I asked: “I have a unique request for you and I hope you are willing to help me…” As I explained to him that I would like it if he drew a giraffe for me and why, he stares at me with the most confused look.

“You want me to draw a giraffe?” Larkin says, repeating the question likely with the hope that I was joking.

He then told me that if I were willing to wait until everyone else in the line had received his autograph, then he would “look into this giraffe thing.”

I waited patiently and it seemed as though everyone within the hardware store was gawking at me, but I continued to wait, certain that my patience would result in a very special giraffe drawing.

And I was right. My perseverance did pay off.

Once the line has subsided, he called me over. He stared at the blank sheet of paper for a few seconds, pondering if this was something he really wanted to do; he then expressed concern in his ability to accurately draw a giraffe. So I began to quell his fears the best I could:

“Well, they have long necks.”

He scribbled the head of the giraffe very fast, so he could begin drawing a neck, followed by the body.

“They also tend to have a pattern, much like spots.”

He adds a few squiggly spots to the submarine-like giraffe.

“And they tend to have four legs.”

Larkin draws four box-like legs and declares that he is finished, baffled that this is what I had waited for.

I shook his hand and thanked him for his time and his “masterpiece.”

What the hell does one say?

Normally I would insert a really snarky comment down here regarding an individuals’ inability to draw giraffes, but all I can do is silently shake my head in shame.  I am disappointed, Mr. Larkin.