Josh Hartnett (Wiki) is an actor and producer from St. Paul, MN, who is perhaps best known for his roles in Pearl Harber, O, 40 Days and 40 Nights, and 30 Days of Night. When he isn’t acting, he enjoys his long walks on the beach being the reincarnation of Adonis, the Greek God of beauty and desire.

Over his lifetime he has been voted one of Teen People‘s “21 Hottest Stars Under 21” and, later, one of its “25 Hottest Stars Under 25.” Not-Teen People magazine voted him one of the “50 Most Beautiful People” before Bliss clarified this by stating he is the “3rd Sexiest Male.” If that’s still not enough for you, unnecessarily-skeptical reader: PETA voted him the “Sexiest Vegetarian Alive.”

When Mr. Hartnett isn’t out being beautiful, he is also an activist. For example, in 2012, he did a lot of work for the Obama Presidential Campaign in Minnesota, which is where this giraffe comes from.

Now, if I may let you in on a little secret, friend: Growing up, I wanted to be Josh Hartnett. I loved him in The Faculty and – cards on the table – have a thing for Minnesota Joshs. So, it warms my hart seeing our life journeys come together like this. While he’s off being nominated for Teen Choice Awards here I am able to be a part of it …  *wistful sigh*

[Courtesy of the wonderful Stacey Rosana of Minnesota].

Eboo Patel has been a member of Barack Obama’s Advisory Council on Faith-Based Neighborhood Relationships since 2009. He is the founder and Executive Director of Interfaith Youth Core, a Chicago-based international non-profit dedicated to the promotion of interfaith cooperation.

Eboo Patel is a truly inspiring man of whom I met one beautiful weekend in Decorah, IA at Luther College for the Nobel Peace Prize Forum.  It was Friday night where Eboo was guiding a discussion from former Nobel Peace Prize winner Shirin Ebadi.  I, with a twinkle in my eye, looked on as I saw two miraculous things unfolding before me.  First I saw a message being delivered with power and conviction from Shirin Ebadi promoting social justice guided by the calm collected presence of Eboo Patel.  But I also saw something else that fateful day upon that stage.  As I sat there furiously scribing away in my metahipster journal I saw giraffes on that stage.  Not living, breathing, 14-foot tall giraffes, don’t be silly how would Luther College get those in an auditorium? No, I saw the potential for some poorly drawn giraffes on that stage.

Eboo Patel is a Rhodes Scholar and one of today’s foremost experts on religion and interfaith relations.  In my humble opinion I would have to conclude that this man has no business whatsoever drawing a giraffe.  So, when the conversation had come to an end I, like any sane and fully competent person on a mission, decided to disregard the barriers preventing me from going on stage (it is a well known fact that if you act like you know what you are doing people perceive you to know what you are doing and thus don’t question you) and I approached Eboo with all the desirous emotions of a childhood boy on the verge of fulfilling his dream.  He looked me in the eyes, the aura of an important man ever looming about him, and said, “What’s up?”  More noble words may have never been spoken because in that instant I was frozen, the only thing standing between me and immortality by virtue of Giraffes was my own fear.

Nonetheless I was able to muster out, “Eboo, I have a strange request for you.  Would you draw me a giraffe?”  With a confused look on his face he grabbed the notebook from my hand and began to sketch.  He then stopped and looked at me half serious half confused and said, “I don’t know if I should be doing this,” as though there was some moral dilemma in drawing a giraffe.  Or maybe his reservations came from the terror stories floating about the internet of how US Congressman Tim Walz’s inability to draw a giraffe resulted in what may be one of the year’s biggest controversies.  Nonetheless once I assured him there was nothing to fear in contributing to the biggest revolution since the civil rights movement he then resumed, commenting briefly on how his son would love that he is doing this(it’s true, your children will love you much more if you draw a giraffe for us).  After some time spent working on his creation, he realized his giraffe looked more like a camel without humps than it did a giraffe.  Not to be discouraged, however, the final product was finished and handed back to me with a signature and the look of a man who had truly accomplished something. He also wrote giraffe at the top so the viewers of this website dedicated to drawings of giraffes would fully understand that this was, in fact, actually what he was trying to draw.

The following night Eboo gave an incredibly moving speech on interfaith relations, recurring through his speech were examples of important historical figures who promoted the idea that we are better together.  I think I can say with full confidence that when the blank page of my journal said we were better apart, Eboo Patel and his giraffe/camel said we are better together.  You can find Eboo on twitter(@EbooPatel) or you can read his blog at the Washington Post.

But there is only one place you can find his poorly drawn giraffe.  And that is right here my friends. 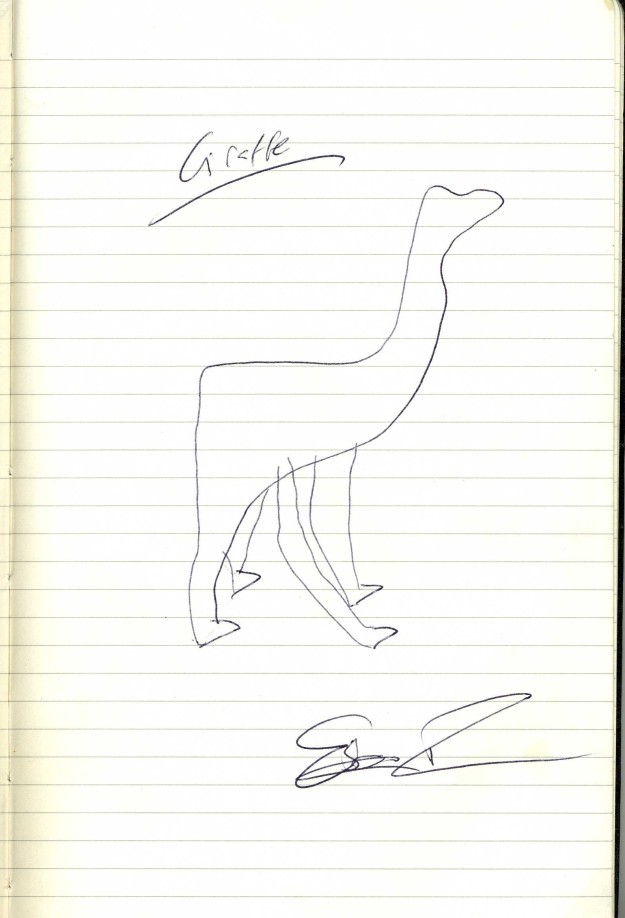 R.T. Rybak is the current mayor of Minneapolis, MN, (serving since 2002) and a former writer for the Minneapolis Tribune who has also contributed to MPR. More importantly, he’s been known to crowd surf at First Avenue concerts. Yeah, that’s Minnesota for you.

So I will start by saying that I have nothing less than the utmost respect for Mayor R.T. Rybak. The guy is kind, smart, passionate and is often the best speaker in the room regardless of the venue. With that said, it is with a heavy heart that I must report the following: when I invited the mayor to participate in GDBWSNBDG at a recent local foods banquet in Montevideo, MN, the first reply I got was “What does a giraffe look like?”

Needless to say I was speechless. Though I do not know the mayor on a personal level, I have spoken to him at enough political functions to know that this question must have been in jest. Or, at the very least, a question of metaphysics.  After all, I as an armchair philosopher I can sympathize: what does anything truly look like?

At least for both his sake and mine this is the story I’m sticking to.

“Well, they have long necks,” I said.

He then took the notebook from my hand and began to draw, clarifying that he would need to draw a rough draft. (One could say that he was drawing a rough gir-aft, but one should probably not say that because it would make them look like an asshole).

Commenting on his work (“Hm, not bad!”) he then tore the draft from the notebook. Becoming serious, he took to his art like a bird to flight … 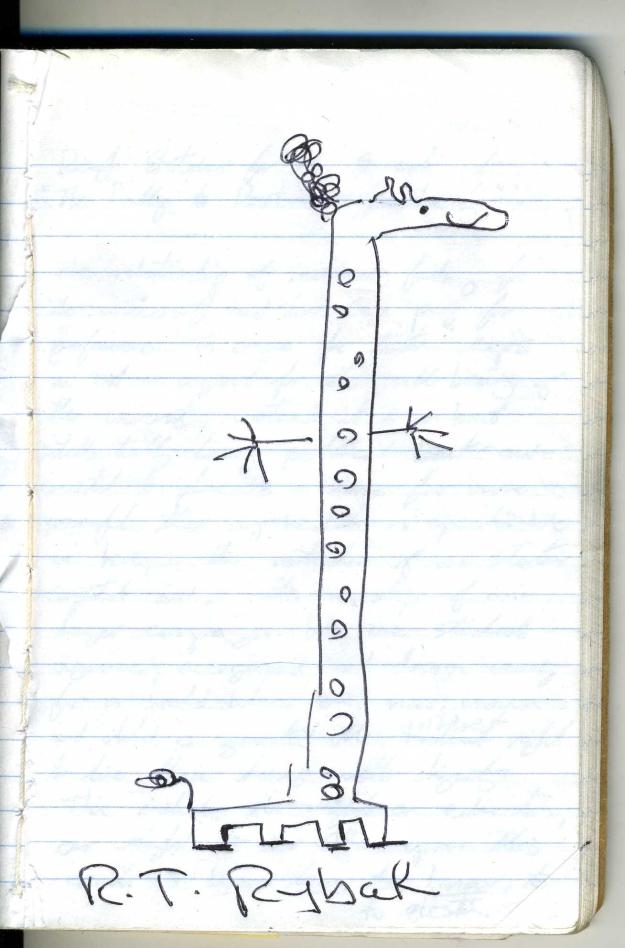 … If said bird was filled with helium, therefore making it a fowl-ish Hindenberg.

Normally the story would end here, but the moment he finished (taking the time to “touch up” the work with neck-arms and a pigtail) he then took the sketch and ran off. Not knowing what was going on (and hoping to get my notebook back), I followed only to see that he had sought out his wife with cries of “Honey, honey, look what I drew!”