PZ Myers (@pzmyers) is a biologist an professor here at the University of Minnesota, Morris, who is best known for his blog Pharyngula and because of it is often ranked on lists of the most influential living atheists. He also has a book coming out in Spring 2012 that some are predicting may make him the Fifth Horseman of New Atheism. Yeah, almost-South-Dakota Minnesota is pretty great.

Unfortunately, though he lives only a few blocks from me I don’t get as many opportunities to talk to him about politics and science as I would wish. In fact, on the few occasions we’re in the same room I tend to sweat nervously and try my damndest to make sure that the buttons on my shirt are in direct vertical alignment with my belt buckle (as every good gentleman knows). The consequence of this is some of the most awkward silence I have ever been a part of. And I’m a fairly awkward guy.

Because the story of how this giraffe was obtained is not really that interesting (the Morris Freethinkers, Jen McCreight and PZ Myers were in a small town bar; he drew a giraffe to humor a kid with a giraffe fetish; I feel ashamed for killing the conversation) I will try my best to compensate by sharing a story that often comes to memory. It’s nothing exciting, I’ll admit, but meh.

In 2009 PZ was named the Humanist of the Year by The Humanist, a magazine about critical inquiry and social concern, and was given a very nice little award that he can carry around to show people that he’s not just a New Atheist but also a Humanist. At least that was the explanation he gave for lugging the award to a public lecture he was giving about the New Atheists. After a lively discussion – and at times, debate – the room cleared out and a few of those interested in continuing the conversation (including PZ) made their way across campus where the Morris Freethinkers (James, Kele and I) and the Morris Philosophy Club had an opportunity to exchange ideas and opinions. All in all, it was an exciting little event made all the more so by the fact that several of the campus’ most opinionated professors were trying to rattling each other’s cages. With the night carrying on a little later than perhaps anticipated for, the spectators (and even the participants) began to dwindle until there were only a few folks left, of which I happened to be one of them.

Getting ready to head out, I noticed out of the corner of my eye that PZ, who was already gone by this point, had forgotten his award. Uncertain as to what the next step would be, we happened to be lucky because one of my friends had his phone number was able to give him a quick ring; he was already across campus, but he was willing to wait for us to catch up. In a rush to head out the door I made the mistake of laying my bare hands upon the statue, which sent my mind into a rush – images of pain, suffering, reason, logic and Carl Sagan flashing and flaring. 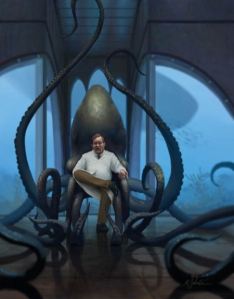 I awoke on the floor to Kele’s soft hand upon my forehead, asking, “What did you see?”

My lips could not formulate words, only tremble. As my vision began to refocus I caught myself gasping for air, unable now to breathe as a single static image held itself in my mind. Without thinking I turned to the garbage can that had been placed beside me, and lest I be too graphic (or sound too foolish), dear reader, I’ll simply say that unfortunately the great vastness of the English lexicon fails me. I can only imagine in the abstract, with the trouble expected from my mortal frame, such descriptors, but I believe them to be very themes of the Poetry of Cthulhu.

“Don’t worry,” there was nonchalance in Kele’s voice, “it happens to all of us.”

Echoes of screams and A.C. Grayling’s lecture on Darwin, Humanism and Science beat upon my skull with every pulse. There are no words.

“‘Everything has been said, but not everyone has said it yet,'” Kele said.

He could read in my eyes my confusion as I spit out, “what?”

“It’s from the Grayling lecture; again, the Humanist netherworld recycles the same lectures,” James said as he lifted me to a chair, making sure the garbage can was never too far from me. “Oddly enough though, Mark got a chapter from The Greatest Show on Earth.”

Their eyes failed to meet mine as they turned to the window, the evening breeze leaking in, the moon wondering how the tides go in and out. “Only the truly damned get Dawkins.”

I have never asked about nor have I ever heard about Mark ever again.

“Haven’t you caught on?”

The room was spinning. I was descending into the caves of madness, where even a flicker of light sends shadows dancing upon the walls. “It’s a -” I paused, unable (or was I unwilling?) to accept what these shades were whispering, miming, a carnival of specters offering hollow warnings of –

The word rolled off my lips like raindrops upon a great canopy, collecting until the momentary burst when it all falls like a shower upon the life below. “It’s a Horcrux. A Horcrux. Horcrux.”

My answer was greeted only with nods, the room solemn that I had to learn this through experience. James filled the silence, “He’s had it for a while now.”

“No, there are more – his iPad, his beard, the  cephalopod he keeps in his office – this is but one of many, each containing a little part of the Fifth Horseman.”

Before I could ask any more questions Kele wrapped the award in a small towel, careful not to lay his skin upon it. Life was slowly returning to my legs as I was helped to my feet and led to the doorway, but before we could even close the door a soft, gentle voice greeted us.

“Oh, hello! You were taking a while so I figured I would start walking toward you, but apparently you never left.” A thin smile spread across his face, “Do you have my … award?” His arms shot out to grab it from Kele’s hands before a reply could even be uttered. “I’m sure you know how much this means to me.”

A great chill ran up my spine.